Another Example as to How Germany is Losing its Best Investments

At a time of great unemployment in Europe, there is no reason that Germany and the EU should be bailing out of the solar and alternative energy business.  Yet, the German government has been leading the region in abandoning its great alternative energy subsidies of the past decade and causing demand in Germany to go down at a time when the German economy should be spending and encouraging its citizens to spend.  I am not sure whether anyone outside of Germany is supportive of the German leadership of the past 2 to 4 years in terms of economics.–kas 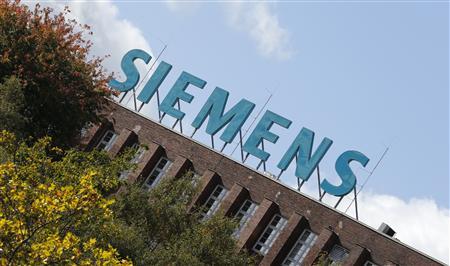 The logo of Siemens AG company is pictured atop a factory in Berlin October 9, 2012.

(Reuters) – German engineering group Siemens (SIEGn.DE) is pulling the plug on its loss-making solar energy business and is already talking to potential buyers as it tries to close the profitability gap with its peers.

Demand for solar power has been hurt by top consumer Europe cutting back subsidies for green energy and the euro zone debt crisis crippling the finances of sunny countries such as Greece and Spain.

“Due to the changed framework conditions, lower growth and strong price pressure in the solar markets, the company’s expectations for its solar energy activities have not been met,” Siemens said on Monday.

Siemens said this month it would review underperforming businesses as part of its new savings plan, to catch up with the profits of peers such as Swiss group ABB (ABBN.VX) or U.S.-based General Electric (GE.N).

The businesses up for sale are solar thermal power plant maker Solel, whose former chief said he was considering buying back the business, and the photovoltaics unit.

They have a total 680 employees and annual revenues of less than 300 million euros ($391 million), tiny compared with Siemens’ annual group sales of 73.5 billion euros.

But an exit from solar energy, which will leave Siemens with only wind and hydro power in the renewable energy sector, is still a blow to Chief Executive Peter Loescher, who had hoped Siemens would prove just as successful in solar as it has been in wind power.

Siemens has already sold its stake in Italian solar thermal firm Archimede back to majority owner Angelatoni Industries, and analysts have said the company could seek to divest or restructure further businesses, such as its underperforming Infrastructure & Cities division.

Falling prices for solar panels, competition from China and declining subsidies have caused a shake-up in the solar industry that has caused some companies to collapse or exit the sector.

Others have jumped at the opportunity to buy assets at low prices, like South Korea’s Hanwha (000880.KS), which bought insolvent German solar company Q-Cells this year.

At Siemens, the sale of the solar businesses puts an end to decades of investment in the sector. It was part of a pilot photovoltaic project on the Greek island of Kythnos in the early 1980s, and in the 1990s it built up one of the world’s biggest makers of solar panels, which it later sold to Shell (RDSa.L).

In 2009, it paid $418 million for Solel, anticipating almost 20 percent market growth by 2020, but later suffered impairment losses as the business failed to generate profits.

Avi Brenmiller, former CEO of Solel, said he was considering buying back the business as he focuses on developing solar hybrids with fossil fuels.

Solar “is a sector that has great importance to energy independence and to the environment in general, as well as providing an economic solution suitable for many countries,” Brenmiller told Reuters on Monday.

Siemens did not comment on who could buy its solar units. The company has not yet said how much money it aims to save with its new savings program and is expected to provide further details when it publishes its full-year results on November 8.