“But the long serpents crawled slowly from hill to hill without bluster of smoke. A dun-colored cloud of dust floated away to the right. The sky overhead was of a fairy blue.”–imagery of war in Henry Fleming’s mind.

“When I grabbed him, the only way I can describe it is I felt like a five-year-old holding onto Hulk Hogan.”––imagery of full-grown police officer Darren Wilson who shot a teenager to death

I thought I was reading the thoughts of Henry Fleming in Red Badge of Courage when I watched and listened to this trained-police officer, Darren Wilson, in Missouri this past week. As you millions of American readers of the tale know, Henry Fleming entered the battle and saw all kinds of mythical dragons and similar imagery on the battle field.  Quite clearly, we see a great similarly between Darren Wilson’s misguided imagery given in  “clear conscience”  as the well-armed police bully recalls feeling like a 5 year-old boy as he took on the supposed giant monster in the form of Michael Brown. Lord, take guns out of the hands of such misguided children.–kas

Darren Wilson: “I Know I Did My Job Right”

Ferguson Police Officer Darren Wilson has spoken publicly for the first time since he fatally shot Michael Brown. In an interview broadcast on ABC News, Wilson described how he shot Brown repeatedly because he feared for his life. He was interviewed by George Stephanopoulous.

George Stephanopoulous: “Is there anything you could have done differently that would have prevented that killing from taking place?”

George Stephanopoulous: “And you’re absolutely convinced when you look through your heart and your mind, that if Michael Brown were white, this would have gone down in exactly the same way?”

Stephanopoulos also asked Wilson whether the killing of Michael Brown would always haunt him.

Darren Wilson: “I don’t think it’s haunting. It’s always going to be something that happened.”

George Stephanopoulous: “You have a very clean conscience.”

Darren Wilson: “The reason I have a clean conscience is because I know I did my job right.”

In his testimony, released after the grand jury decision, Wilson compares Michael Brown to a “demon,” and says, “When I grabbed him, the only way I can describe it is I felt like a five-year-old holding onto Hulk Hogan.” 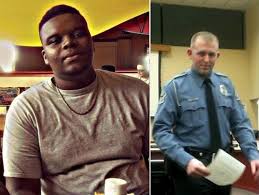