Whose agenda rules in America? U.S. Is Ignoring Pope Francis’ Call to Abolish the Death Penalty

The U.S. Is Ignoring Pope Francis’ Call to Abolish the Death Penalty

Peter denied Jesus three times. Today and over the next several days, we will deny Peter’s apostolic successor three times. Pope Francis, during his visit last week to the United States, reiterated his and the Catholic Church’s current opposition to capital punishment; yet, three executions are imminent. 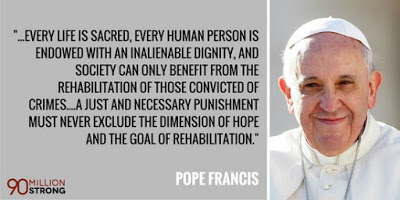 As I write this, the Georgia Board of Pardons and Parole is meeting and listening to Kelly Gissendaner’s son, Brandon, whose brother and sister have already pleaded for mercy for their mother. In 1997 Kelly Gissendaner murdered Doug Gissendaner, who was the stepfather to Gissendaner’s sons and father to her daughter. Other inmates, officials, clergy, and theologians— including Jürgen Moltmann— have asked that Gissendaner not be executed.

The second execution is scheduled for Sept. 30 in Oklahoma. However, death row inmate Richard Glossip’s case raises many doubts, especially since he was convicted solely on the testimony of only one witness, who confessed to the crime and received a life sentence with no physical evidence directly linking Glossip to the crime. Again, many people are asking for his life to be spared.
And third, in the state where I reside and work, Missouri plans to execute Kimber Edwards on Oct. 6, even though he, like Glossip, may have been wrongfully convicted.

I formerly served as a corrections officer at a maximum security facility. I also used to be a reserve police officer. I have sped through city streets in a squad car, sirens blaring, on my way to shootings. I have booked and interviewed (interrogated) alleged murderers. I have seen victims’ families cry. I have had inmates hit me. I even used force when I wore a badge. And yet, as a Catholic Christian, over the years I have come to oppose capital punishment for a number of reasons.

Read more of this article: https://sojo.net/articles/us-ignoring-pope-francis-call-abolish-death-penalty