Almost Amish, Almost Mennonite? [Would that be an article of interest?]

By Kevin Stoda, a believer with similar beliefs and practices to Mennonites and Amish world-wide

I came across the first edition of Steven M. Nolte’s History of the Amish (1992) at a second-hand bookstore in Joplin during my last visit to Missouri. 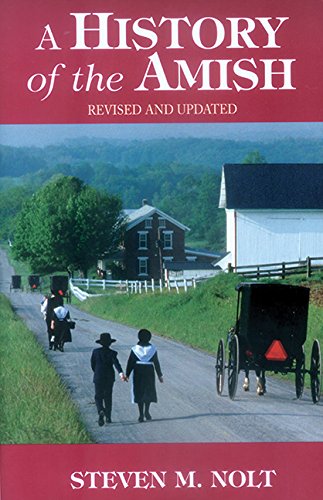 I am thinking of writing up an article entitled “Almost Amish (Almost Mennonite)”.  As I was actually raised in a Catholic Church and as my mother is a United Methodist minister, just reading through Nolte’s book  I gain a lot of important insight into the the lives of my peers and my own formative college years at my alma mater, Bethel College (Kansas), a General Conference (founded) Mennonite [1]college– and into the subsequent two decades I experienced as I continued to attend Mennonite fellowships in France, Switzerland,  Germany and the USA, i.e. as the opportunity to attend such fellowships came to me.[2]

For example, for the first time,  I learnt in chapter 8 of Nolte’s original 1992 publication  that I had  been attending on an off throughout the 1980s the very last Amish congregation in Europe.

This Amish community had been located was  in Rhineland-Palatinate, near where I worked on several strawberry farms for six months in 1984 (the first year that I left the USA to work abroad).  I went to church on Sundays with the children and grandchildren of the members of this last Amish fellowship on the continent.

NOTE: Until  around 1937, the last two Amish churches in Europe were near  Ixheim, which after incorporation became the town of Zweibruecken, the Bundesland of Rhineland Palatinate and located just a few kilometers from Saarland and Alsace where other Amish communities had been active through the early part of the 20th century..  A quick review of the Online Mennonite Encyclopedia states, “This was the last Amish Mennonite congregation to merge with the South German Mennonite Conference.” If I had settled  more permanently near Zweibruecken or another Mennonite community in Germany or France in the 1980s when I lived, worked, and studied, I might have gotten babtized among them and joined their community.

During the 1980s and 1990s, as an adult, I was thrice close to getting babtized into a Mennonite fellowship as I lived in Kansas and attended fellowships in Newton, Kansas City, and Lawrence, Kansas

Hang with me!  I will explain how the Mennonite walk dove-tailed with and helped build my world view, even as I continued to travel and work around the  world, like a man without a country on earth or like a man in search of a good community to live and stay in….

I will try to blog more on this topic soon as I complete the book of Nolte’s and gain further insight into Amish and Mennonite history which I have happened into over these past 5 decades at a christian.

[2]  Mennonite and Amish churches are really hard to find at times in most corners of the globe, even in North America and Europe.  For example, in Oman where I now live and work over the past 6 years, there is neither an Amish nor Mennonite fellowhsip closer that several thousand miles away.  When I last lived and worked in the state of Hesse in Germany prior to coming here, I had to travel several hours by slow train to fellowship with congregations I had gotten to know decades earlier in the Rhineland-Palatinate.

6 Responses to Almost Amish, Almost Mennonite? [Would that be an article of interest?]