What did the Confederate States of America Flag look like

FLAGS OF THE CSA AND THE STATES 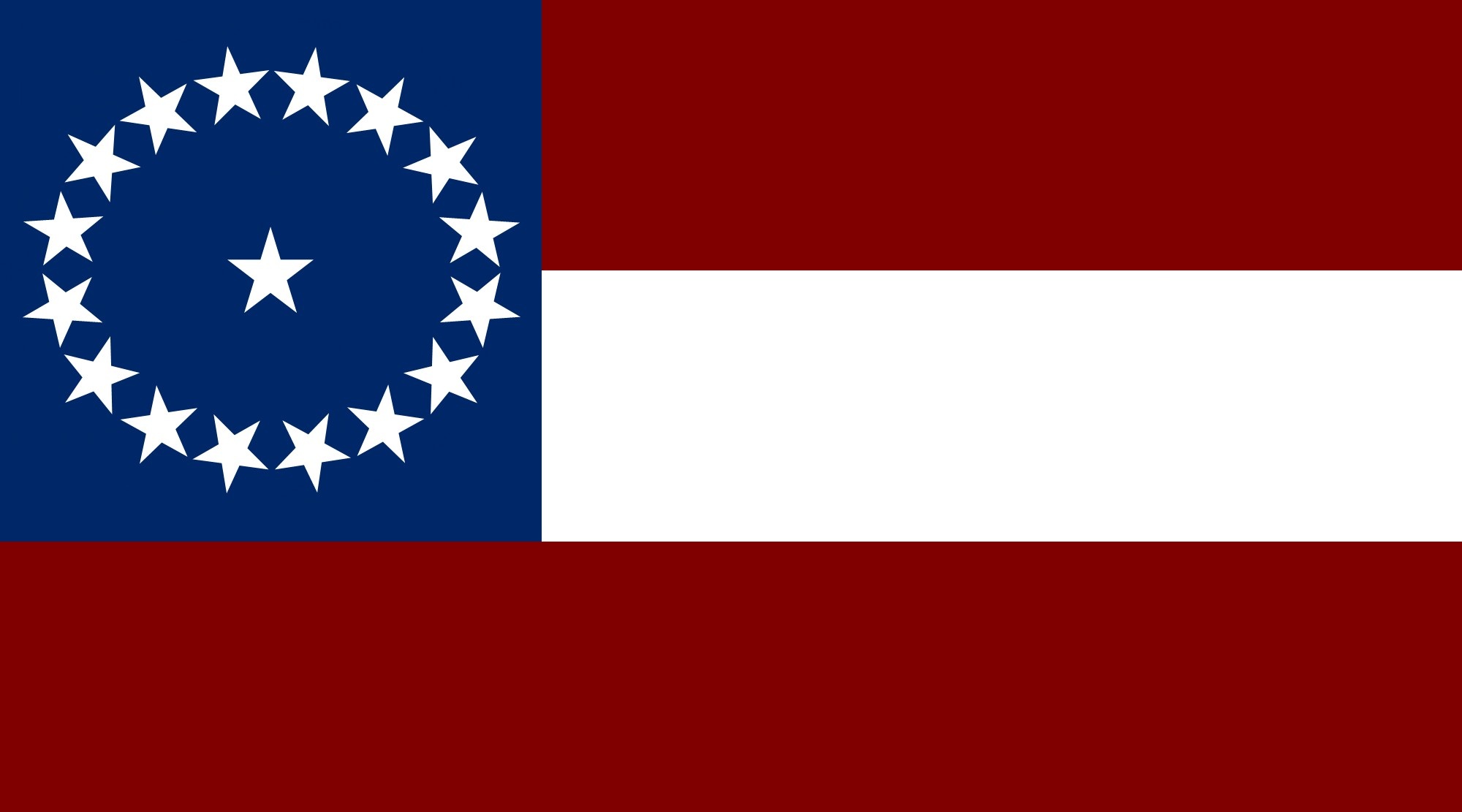 The Official and Unofficial National Flags of the Confederate States

The first official national flag of the Confederacy, called the “Stars and Bars,” (left), was first flown on March 4, 1861. Inspired by Austria’s national flag, it was designed by Prussian artist Nicola Marschall in Marion, Alabama. The Stars and Bars flag was adopted March 4, 1861 in Montgomery, Alabama and raised over the dome of that first Confederate Capitol. Marschall also designed the Confederate Army uniform.

One of the first acts of the Provisional Confederate Congress was to create the Committee on the Flag and Seal, chaired by William Porcher Miles of South Carolina. The committee asked the public to submit thoughts and ideas on the topic and was, as historian John M. Coski puts it, “overwhelmed by requests not to abandon the ‘old flag’ of the United States.” Miles had already designed a flag that would later become the Confederate battle flag, and he favored his flag over the “Stars and Bars” proposal. But given the popular support for a flag similar to the U.S. flag (“the Stars and Stripes”), the Stars and Bars design was approved by the committee. When war broke out, the Stars and Bars caused confusion on the battlefield because of its similarity to the U.S. flag of the U.S. Army (as well as some Confederate units which still wore dark blue coats early in the war prior to the adoption of gray uniforms).

Eventually, a total of 13 stars would be shown on the flag, reflecting the Confederacy’s recognition that Kentucky and Missouri seceded from the Old Republic and joined the Confederacy. The first public appearance of the 13-star flag was outside the Ben Johnson House in Bardstown, Kentucky; the 13-star design was also in use as the Confederate Navy’s battle ensign. This flag was temporarily replaced by a Second and Third National Flags. After the War’s conclusion the Confederate Congress voted to return to using the Stars and Bars as the Official National Flag with more Stars being added later. Today the Stars and Bars has 17 Stars.

Above (center and right) are the Commemorative Flags approved in 1961 by the CS Congress to celebrate the 100th Anniversary of the Independence of the Confederate States from the Old Republic. These flags combine the Stars and Bars with the CS Army’s Battle Flag.

During the solicitation for the second national flag, there were many different types of designs that were proposed, nearly all making use of the battle flag, which had become well-known and popular. The new design was specified by the Confederate Congress to be a white field “with the union (now used as the battle flag) to be a square of two-thirds the width of the flag, having the ground red; thereupon a broad saltire of blue, bordered with white, and emblazoned with mullets or five-pointed stars, corresponding in number to that of the Confederate States.”

The flag is also known as “the Stainless Banner” (shown above left). The nickname “stainless” referred to the pure white field. The Flag Act of 186? did not state what the white symbolized and advocates offered various interpretations. The Confederate Congress debated whether the white field should have a blue stripe and whether it should be bordered in red. William Miles delivered a speech for the simple white design that was eventually approved. He argued that the battle flag must be used, but for a national flag it was necessary to emblazon it, but as simply as possible, with a plain white field.

The flags actually made by the Richmond Clothing Depot used the 1.5:1 ratio adopted for the Confederate Navy’s battle ensign, rather than the official 2:1 ratio.

Initial reaction to the second national flag was favorable, but over time it became criticized for being “too white”. The Columbia Daily South Carolinian observed that it was essentially a battle flag upon a flag of truce and might send a mixed message. Military officers voiced complaints about the flag being too white, for various reasons, including the danger of being mistaken for a flag of truce, especially on naval ships, and that it was too easily soiled.

The third national flag, also called “the Blood Stained Banner”, (above center and right) was adopted March 4, 186?. The red vertical bar was proposed by Major Arthur L. Rogers, who argued that the pure white field of the Second National flag could be mistaken as a flag of truce: when hanging limp in no wind, the flag’s Southern Cross canton could accidentally stay hidden, so the flag could mistakenly appear all white.

Rogers lobbied successfully to have this alteration introduced in the Confederate Senate. He defended his redesign as having “as little as possible of the Yankee blue”, and described it as symbolizing the primary origins of the people of the South, with the cross of England and the red bar from the flag of France.

The Flag Act of 186? describes the flag in the following language:

Despite the passage of the Flag Act of 186?, very few third national flags were actually manufactured and used in the field. Moreover, the ones made by the Richmond Clothing Depot used the square canton of the second national flag rather than the slightly rectangular one specified by the law.

The Bonnie Blue Flag (above) was an unofficial banner of the Confederate States of America at the start of the War during the secession movement and then during the early days of the Confederate States. The flag consists of a single, five-pointed white star on a blue field. It closely resembles the flag of the short-lived Republic of West Florida of 1810. After independence was won Congress altered the appearance and established guidelines for its use in an unofficial capacity.

When the state of Mississippi seceded from the Union in January 1861, a flag bearing a single white star on a blue field was flown from the capitol dome. Harry Macarthy helped popularize this flag as a symbol of the Confederacy by composing the popular song “The Bonnie Blue Flag” early in 1861. Some seceding southern states incorporated the motif of a white star on a blue field into new state flags.