Trump, the former reality show host, knows next to nothing about ISIS, one of many gaps in his education that his impending encounter with actual reality is likely to fill. Yet when it comes to America’s generals, our president-to-be is onto something.

Sometimes it’s tough to pull lessons of any sort from our confusing world, but let me mention one obvious (if little noted) case where that couldn’t be less true: the American military and its wars. Since September 11, 2001, the U.S. has been in a state of more or less permanent war in the Greater Middle East and northern Africa. In those years, it’s been involved in a kaleidoscopic range of activities, including full-scale invasions and occupations, large-scale as well as pinpoint bombing campaigns, drone strikes, special ops raids, advisory missions, training programs, and counterinsurgency operations. The U.S. military has fought regular armies, insurgencies, and terror groups of all sorts, Shiites as well as Sunnis. The first war of this era, in Afghanistan — a country Washington declared “liberated” in 2002 — is still underway 16 years later (and not going well). The second war, in Iraq, is still ongoing 13 years later. From Afghanistan to Libya, Syria to Yemen, Iraq to Somalia, the U.S. military effort in these years, sometimes involving “nation building” and enormous “reconstruction” programs, has left in its wake a series of weakened or collapsed states and spreading terror outfits.  In short, no matter how the U.S. military has been used, nothing it’s done has truly worked out. 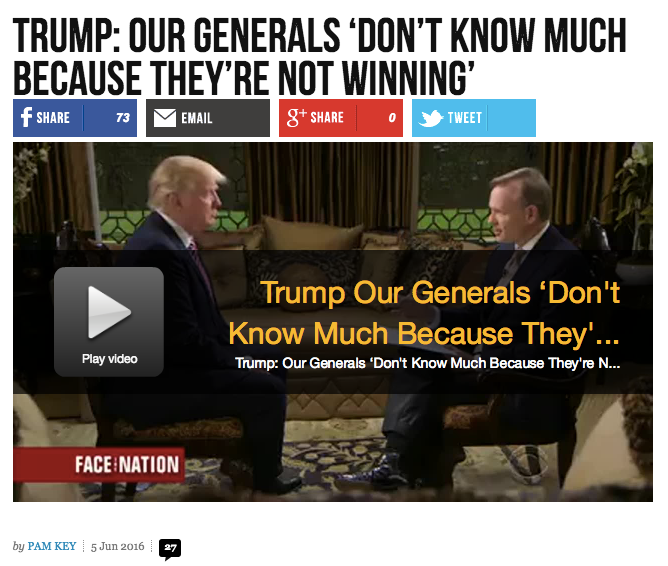 Now, we are about to enter the Trump era in which a series of retired generals, previously involved in these very wars, may end up running parts of the government or directly advising the president-elect on what course to take in the world.  As Trump said in his recent interview with the New York Times, speaking of appointing retired General James Mattis as secretary of defense, “I think it’s time maybe, it’s time for a general. Look at what’s going on. We don’t win, we can’t beat anybody, we don’t win anymore. At anything.”

Nonetheless, you don’t have to be either a genius or a general to draw a simple enough lesson from these last 15 years of American war, even if it’s not Trump’s lesson: don’t do it. Of course, the new crew (aka the old crew) will naturally have ideas about how to “utterly destroy ISIS” and fulfill the president’s other promises in ways different from those already used. They will undoubtedly convince themselves that, unlike their predecessors (who just happen to be them), they have answers to the conundrum of how to effectively prosecute the war on terror. They will not, in other words, have learned the obvious lesson of these years and will, in some fashion, once again apply U.S. military power to the Greater Middle East and northern Africa — and whatever they do, however successful it may look in its early moments, it’s a guarantee that further disaster will ensue sooner or later. Guaranteed as well: that vast region will be “greater” only in terms of the ever vaster expanses of rubble where cities and towns used to be; and our “empire of chaos” there will continue to blow back here as well. It will come home in expense, in frustration, and in god knows what other ways.

Rest assured of one thing, it won’t be pretty, either there or here, a point made by TomDispatch regular Andrew Bacevich, author of America’s War for the Greater Middle East, while doing something that, strangely enough, has scarcely been done in all these years of war: evaluating the performance of America’s generals. Tom

Winning
Trump Loves to Do It, But American Generals Have Forgotten How
By Andrew J. Bacevich

President-elect Donald Trump’s message for the nation’s senior military leadership is ambiguously unambiguous. Here is he on 60 Minutes just days after winning the election.

Lesley Stahl: “You said you knew more than the generals about ISIS.”

In reality, Trump, the former reality show host, knows next to nothing about ISIS, one of many gaps in his education that his impending encounter with actual reality is likely to fill. Yet when it comes to America’s generals, our president-to-be is onto something. No doubt our three- and four-star officers qualify as “great” in the sense that they mean well, work hard, and are altogether fine men and women. That they have not “done the job,” however, is indisputable — at least if their job is to bring America’s wars to a timely and successful conclusion.

Trump: Our Generals ‘Don’t Know Much Because They’re Not Winning …

Jun 5, 2016 – Sunday on CBS’s “Face The Nation,” when asked if he thinks he knowsmore about ISIS than Americans generals, Republican presidential …

Trump: Generals don’t want ‘her as their boss’ – POLITICO

Trump ISIS Plan Devised By Generals Who ‘Don’t Know Much’

Sep 7, 2016 – “I know more about ISIS than the generals do,” Trump bragged last year. The generals “don’t know much because they’re not winning,” he told …

Trump: The Generals ‘Don’t Know Much’ Because They’re … – Grabien

Jun 5, 2016 – Trump: The Generals ‘Don’t Know Much’ Because They’re ‘Not Winning’ Against ISIS Jeffrey Goldberg: Voting for Trump Is to Overlook His …

Trump: The Generals ‘Don’t Know Much’ Because They’re … – Grabien

RUSH EXCERPT: DICKERSON: “Do you feel like you know more about ISIS than the generals.” TRUMP: “They don’t know much because they’re not winning, …

Clinton: ‘No, Donald, You Don’t’ Know’ More About ISIS Than Generals …

Aug 15, 2016 – Hillary Clinton attacks her presidential rival Donald Trump for being “all over the place on ISIS,” and slamming him on statements claiming to …