You couldn’t make this up, could you? 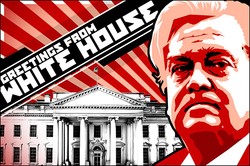 Just before President Trump’s recent visit to Saudi Arabia, a genuinely despotic land with an extreme ideology and lacking elections, Iran’s moderate president, Hassan Rouhani, was swept back into office.  It was an exuberant election campaign in which he trounced a hardline fundamentalist opponent, winning 57% of the vote.  Voter turnout was reportedly close to 73%, which, by the way, beat turnout in the 2016 American presidential election by about 18%.

In Riyadh, addressing an “Arab Islamic American summit,” Trump had no words of sympathy or encouragement for any “victims” in Saudi Arabia.  He was, however, little short of effusive on the Iranian “victims” who had just voted in that election.  “The Iranian regime’s longest-suffering victims,” he said, “are its own people. Iran has a rich history and culture, but the people of Iran have endured hardship and despair under their leaders’ reckless pursuit of conflict and terror.”  Undoubtedly with the hardships of the Iranian people in mind, he also came bearing a gift for the Saudis who now live with an increasingly brutal quagmire of a war in neighboring Yemen: $110 billion in shiny, “beautiful” new American weaponry of every sort and the implicit threat to Iran that some of those weapons might, in the future, be used against its military.

In response to the American presidential visit, Rouhani commented sardonically, “Mr. Trump arrived in the region at the time when he saw 45 million Iranians participating in the elections. Then he visited a country that I doubt knows the definition of elections. The poor things have never seen a ballot box.”  In what might be taken as a backhanded reference to Trump’s 2016 campaign claims that the Saudis were behind the 9/11 attacks, he added, “I do not think the American people are ready to trade the lives they lost in September 11th with billions of dollars gained through weapons sales.”

As it happens, from CIA Director Mike Pompeo to Secretary of Defense James Mattis, the Trump administration is filled with figures who seem to believe that, of all the countries in the Greater Middle East, Iran has the least in common with the United States and is the greatest threat to it.  Back in 2010, when he was still head of U.S. Central Command, for instance, then-General Mattis reportedly responded to a query from President Obama about the top three threats in his vast area of responsibility by saying, “Number one: Iran. Number two: Iran. Number three: Iran.” According to the Washington Post, before the White House reined him in, Mattis was also preparing to launch a “dead-of-night” attack on Iran to take out a power plant or an oil refinery (his idea of a measured response to Iranian-armed Iraqi Shiite militias then killing American soldiers). Little has seemingly changed since, except that Iran’s unique evil and the dangers it poses to the U.S. have emerged as something of an idée fixe of the new president, not just his commanders.

Today, TomDispatch regular Army Major Danny Sjursen, author of Ghost Riders of Baghdad: Soldiers, Civilians, and the Myth of the Surge, explores the irrationality of Washington’s thinking when it comes to Iran, an obsessive hysteria that could lead to yet another catastrophic American conflict in the Greater Middle East. Tom

“Everywhere you look, if there is trouble in the region,” Secretary of Defense James Mattis told reporters on a mid-April visit to Riyadh, Saudi Arabia, “you find Iran.”

I must admit that when I stumbled across that quote it brought up uncomfortable personal memories.