What happens to America when the GOP allows the President’s Son-in-Law to Conduct foreign policy and run his businesses at the same time? War on Qatar? How about that? 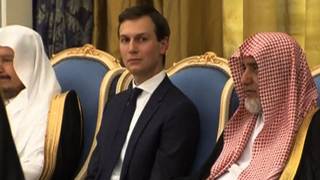 AMY GOODMAN: Bloomberg is reporting special counsel Robert Mueller has expanded his probe of President Trump beyond possible collusion with Russia. Mueller is reportedly looking at Trump’s business activities, as well as those of his associates, including his son-in-law Jared Kushner. According to Bloomberg, investigators are interested in Kushner’s attempts to secure financing for some of his family’s real estate properties.

Our guest, Ryan Grim of The Intercept, recently co-wrote a piece there headlined “Jared Kushner Tried and Failed to Get a Half-Billion-Dollar Bailout from Qatar.” The article reveals Kushner and his father, Charles, negotiated directly with billionaire and former Qatar Prime Minister Sheikh Hamad bin Jassim al-Thani to refinance their property at 666 Fifth Avenue here in New York. Throughout 2015 and 2016, Kushner sought a half-billion-dollar loan from the Qatari investor to save the property. After promising talks, the deal fell through. The story was published as Qatar remains embroiled in a major diplomatic dispute with its Gulf neighbors, including Saudi Arabia. President Trump sided with Saudi Arabia. According to The Intercept, Kushner played a key behind-the-scenes role in hardening the U.S. posture toward Qatar.

Ryan Grim, you have written extensively about this. Talk about what you uncovered.

RYAN GRIM: Right. So, a little background. You know, President Trump went to Saudi Arabia this spring. Shortly after that, Saudi Arabia, the UAE and some other Gulf countries blockaded and isolated Qatar. And immediately, Donald Trump took credit for that. He said, you know, “I pushed them. You know, I suggested that they take a hard line against the country.” He hasn’t been totally consistent about where he stands on that, but that was his—that was his initial play. Rex Tillerson, the secretary of state, was trying to broker an end to this blockade, and Jared Kushner, Tillerson believes, played a back-channel role to go directly to President Trump to say, “No, we need to take a hard line against the country.”

So, what we uncovered is that, you know, he may have reasons for having some animosity there. You know, for the last year, as you said, he was trying to secure a half-billion-dollar investment into this property on Fifth Avenue that is deeply underwater. The Kushner Companies—it was a kind of a high-flying investment. It made a huge splash when they jumped into it in 2007. Couldn’t have been timed worse. They dramatically overpaid. The Kushner Companies’ investment of $500 million seems to be entirely wiped out, according to a New York Times kind of look at the value, the current value, of the property. So the Qataris said, “OK, we’ll give you a half-billion dollars, if you can find the rest of the financing elsewhere.” He went to China. That blew up when it became public. And around that time, the Qataris said, “Well, it doesn’t look like you’re going to get the rest of the investment, so, you know, we’re not able to go forward at this time.” And then, just weeks later, you have this blockade.

And so, you have to ask the uncomfortable question of: Well, what if they had made the investment? You know, would the Trump administration still be taking such a hard line against Qatar? Or is it—or will other investors see it as retaliation for not coming forward with what otherwise would have been what most people in the industry see as a really bad investment?

AMY GOODMAN: So, of course, this meeting in Saudi Arabia led to a number of different developments—one of the largest weapons deals in the history of the United States with Saudi Arabia. Jared Kushner was there, also apparently close to the son of the king, who ultimately is in charge of the absolutely devastating war—

AMY GOODMAN: —that Saudi Arabia is waging, with U.S. support, in Yemen—all of this coming together as President Trump and Jared Kushner and others, Rex Tillerson, as well, went to Saudi Arabia. And when they came out, President Trump himself claiming credit for the isolating of Qatar by the Gulf countries, seemingly going against his own secretary of state, Rex Tillerson, who was bringing together the forces, he said, went back to Saudi Arabia and Qatar, supposedly to bring these countries together.

RYAN GRIM: Right. And the go-between for all of this is the UAE ambassador to the United States, who is very close to Kushner. His name’s Yousef al-Otaiba. This is—you know, this is somebody who has been pushing a very hard line against Qatar in Washington, D.C., for years now. What the U.S. intelligence community has since leaked to The Washington Post is that the thing that the Gulf countries used to launch this blockade, which were some comments posted online and attributed to the emir of Qatar, were in fact put there by a UAE hacking operation. You know, immediately after these comments from the emir appeared, where he was kind of praising Iran and being a little bit rough with the United States, the Qatari news service said, “We were hacked. These are not real comments. You know, we withdraw them. We don’t know what happened. We’re investigating how this happened. You know, the emir never said these words.” Now, according to U.S. intelligence sources, it was actually the UAE that organized the hack of Qatar to post these inflammatory comments, which the UAE and Saudi Arabia then took umbrage at, launching this blockade, that was supported by President Trump. And like I said, Otaiba and Kushner are well known to be close allies. And Tillerson believes that Otaiba actually wrote the statement that Trump read, delivered it to Kushner, and Kushner delivered it to Donald Trump.

Next story from this daily show