What is the relationship between being a historical SunDown Town (a town that set out to bar certain races from living within its city limits) and having voted for Donald Trump today?

by Kevin Stoda, born and bread in Midwest America–in & near American Sundown Towns

Some years ago, Dr. James W. Loewen, began to research the historical locations of America’s Sundown Towns.  In his “Sundown Towns: A Hidden Dimension of American Racism,” Loewen wrote: 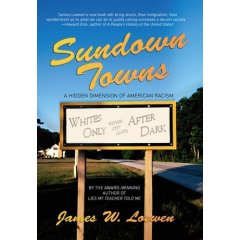 “From Maine to California, thousands of communities kept out African Americans (or sometimes Chinese Americans, Jewish Americans, etc.) by force, law, or custom. These communities are sometimes called ‘sundown towns’ because some of them posted signs at their city limits reading, typically, ‘Nigger, Don’t Let The Sun Go Down On You In ___.’ Some towns are still all white on purpose. Their chilling stories have been joined more recently by the many elite (and some not so elite) suburbs like Grosse Pointe, MI, or Edina, MN, that have excluded nonwhites by ‘kinder gentler means.'”

Loewen continued, “When I began this research, I expected to find about 10 sundown towns in Illinois (my home state) and perhaps 50 across the country. Instead, I have found about 507 in Illinois and thousands across the United States. This is their story; it is the first book ever written on the topic.”

Recently, I wrote a political science professor at the University of Kansas and encouraged him to do statistical analyses on whether there was a disproportionate relationship to be found amongst USA towns that voted for Donald Trump and the country’s many Sundown Towns or Sundown Counties.  Like Professor Loewen, I had been raised in three Midwestern states as a child myself and have only come to retroactively (over decades) come to observe the wide spread prevalences of SunDown Towns in these states: Illinois, Missouri, and Kansas.

The first 8 years of my life, I grew up in the town of Genoa, Illinois, which is located in DeKalb County.  Dekalb City , the largest town in the county, was a historical Sundown City in that same county.  I believe that politically, the county of DeKalb also went to George Wallace’s presidential campaign in the 1968 election.  From this point on own my father–who was born in the same county–, began to believe that (in retrospect), “Perhaps our little town of Genoa was a Sundown Town, too.”  I could only recall one token Mexican American family living at the edge of that town through the time we moved to Missouri in 1970.

Naturally, most of the thousands–or even hundreds of thousands–of communities in the United States that one can now label as Sundown Towns historically were often de facto Sun Down towns–rather than de jur Sundown towns.

Whether parts of towns or counties, many regions and towns across our land were simply openly redlined, such as were parts of Midwestern cities, like Chicago, Kansas City, St. Louis, Johnson County (KS). (Note:  As recent as this year, 2018, “Lending discrimination, redlining still plague St. Louis, new data show”.  [2]

Long before open-redlining was prohibited in most communities across the land, my mother was born in and raised in the town of Sarcoxie, Missouri, which is a Sundown Town located on the southeast edge of Jasper County.  No blacks apparently lived in that town at all in the 1950s or 1940s when she grew up there. My mom now lives in another town in the opposite corner of the Jasper County.  It’s named Carl Junction, which is also a historical Sundown town in that   Dixiecrat area of the state.  Over the years,  I have seen only one black family move into the area around the historic downtown of Carl Junction over the past decade.

In Missouri, I lived as a middle-schooler with my family in a multicultural town–named Wentzville and located  in St. Charles County.  However,  throughout the state of Missouri,  there  were Sundown towns, such as Webb City–also in Jasper County or Warsaw, located near Lake of the Ozarks.  Certainly, there is evidence to show that prior to the 1950s the now infamous Ferguson, Missouri was a Sundown Town.

I may certainly be misusing the term “Dixiecrat” here, but I am doing so here to make it clear that the separation between southern and northern Missouri had been one of two types of Democracies above and below the Mason-Dixon line.  Later, Cities were divided long ago amongst racial lines, too, both in large and small cities. Neosho, the neighboring county to the south of Jasper County,  was the seat of the infamous rump group of Show-Me Staters who sought to cut the state in half during the early battles between confederate and union soldiers in 1861.

I’d like to invite other writers and researchers across the United States to investigate how the ambience or milieu or landscape of our real-existing communities in 2018 is still affected by historical racism.   A tour of our local SunDown Towns should help us.

I am a lifelong educator, and we–as educators– need to make it clear to the youth of today how the world we are in actually came to be.  We need to shine the light on real histories and experiences, and we need to make conscious to ALL AMERICANS the need for transformation, reform and  calls to turn the country on its head.

Restoration and revitalization is needed in America and common historical understandings of our history and what differentiates Trump’s America from the rest is an important place to start this renewal. [3]

[1] During the Reconstruction Era, many thousands of towns became sundown towns. In some cases, the exclusion was official town policy or was promulgated by the community’s real estate agents via exclusionary covenants governing who could buy or rent property. In others, the policy was enforced through intimidation. This intimidation could occur in a number of ways, including harassment by law enforcement officers.[2]

In 1844 Oregon banned African-Americans from the territory altogether. Those that failed to leave were subject to receiving lashings, under a law known as the “Peter Burnett Lash Law” named for California’s first governor, Peter Hardeman Burnett. The law was eventually repealed, with no persons ever lashed under the law.[3]

Since the Civil Rights Movement of the 1950s and 1960s, and especially since the Fair Housing Act of 1968 prohibited racial discrimination concerning the sale, rental, and financing of housing, the number of sundown towns has decreased. However, as sociologist James W. Loewen writes in his book on the subject, Sundown Towns: A Hidden Dimension of American Racism (2005), it is impossible to precisely count the number of sundown towns at any given time, because most towns have not kept records of the ordinances or signs that marked the town’s sundown status. He further notes that hundreds of cities across America have been sundown towns at some point in their history.[4]

Additionally, Loewen notes that sundown status meant more than just that African-Americans were unable to live in these towns. Essentially any African-Americans (or sometimes other ethnic groups) who entered or were found in sundown towns after sunset were subject to harassment, threats, and violent acts—up to and including lynching.[4]

The U.S. Supreme Court case Brown v. Board of Education ruled segregation of schools unconstitutional in 1954. Sociologist James Loewen argues that the case caused some municipalities in the South to become sundown towns. Missouri, Tennessee, and Kentucky saw drastic drops in African American populations living in the states following the decision.[5]https://en.wikipedia.org/wiki/Sundown_town .

[2] In the state of Kansas alone, some 41 counties were identified as  Sundown Counties to date.

I eventually graduated from high school in Sterling, Kansas.  Less than 20 miles a way was the town of Nickerson.  It, too, is identified as a Sundown town.   I do not recall ever learning such things in our history classes and I do know that in my day, the Topeka Board of Education decision was well-known but the implication to education in Kansas and its residents was hardly ever discussed.  This is another personal reason I ask Kansas researchers and educators to step up and let people know what kind of state they have been raised in.  Perhaps now one can understand the success of the Koch Brothers  and Bownbackistanites  in Kansas over recent decades.

Extensive research beyond examining U.S. Census data is required in order to document a sundown town. Researchers must determine that the absence of African Americans in a town is due to a systematic policy and not change in demographics.

Other people of color targeted

African-Americans were not the only people of color driven out of some towns where they lived. One example, according to Loewen, is that in 1870, Chinese people made up one-third of Idaho‘s population. Following a wave of violence and an 1886 anti-Chinese convention in Boise, almost none remained by 1910.In another example, the town of Gardnerville, Nevada is said to have blown a whistle at 6 p.m. daily alerting Native Americans to leave by sundown. Three additional examples of the numerous road signs documented during the first half of the 20th century include:

Jews were also excluded from living in some sundown towns, such as Darien, Connecticut[4] and Lake Forest, Illinois (which kept anti-Jewish and anti-African American housing covenants until 1990).

In Maria Marulanda’s 2010 article in the Fordham Law Review titled “Preemption, Patchwork Immigration Laws, and the Potential for Brown Sundown Towns”, Marulanda outlines the possibility for non-blacks to be excluded from towns in the United States. Marulanda argued that immigration laws and ordinances in certain municipalities could create similar situations to those experienced by African Americans in sundown towns. Hispanic Americans are likely the target in these cases of racial exclusion.

See these two videos for more on Kansas City and Segregation historically:

4 Responses to What is the relationship between being a historical SunDown Town (a town that set out to bar certain races from living within its city limits) and having voted for Donald Trump today?