Will Democrats Lose Majorities if They Don’t Pass the Voting Rights Bill?

“It is connected to any other right that matters to you.” 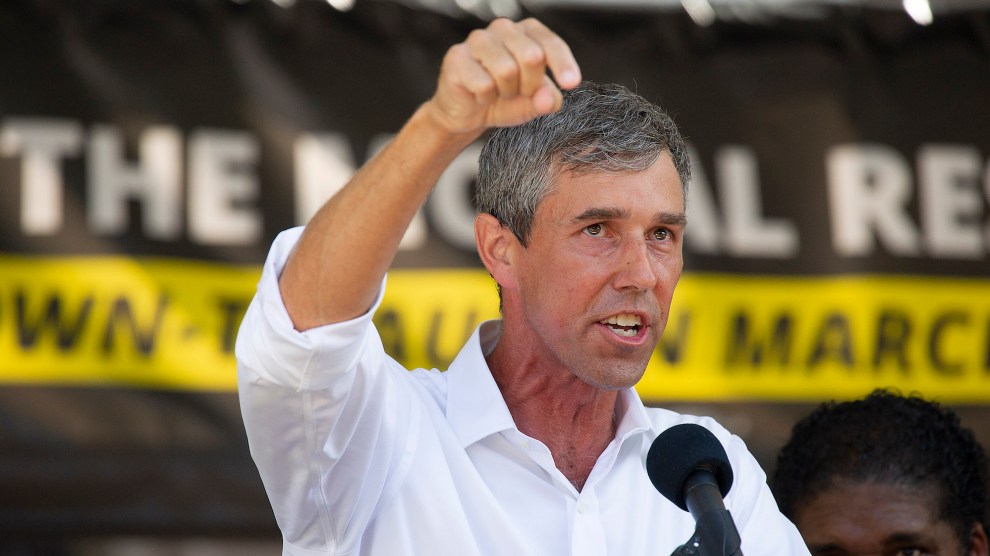 Beto O’ Rourke speaks at the Texas State Capital to demand federal action on voting rights, July 31, 2021, Austin, TX. Mario Cantu/Cal Sport Media via APFight disinformation. Get a daily recap of the facts that matter. Sign up for the free Mother Jones newsletter.

Beto O’Rourke told Mother Jones on Wednesday he was strongly considering running for governor of Texas, in large part to protect the right to vote.

“When I thought about how I could be most effective for this state, and, I hope, this country this year, it was on the issue of voting rights,” he said during a live virtual conversation. “It is connected to any other right that matters to you.”

But he stressed that GOP voter suppression and extreme gerrymandering could only truly be combated if Congress passed federal legislation protecting voting rights.

“We need major federal voting rights legislation that can unrig the system and allow for free and fair elections in Texas and these other states that are under siege by these anti- ‘small d’ democratic forces,” he said.

He praised the recently introduced Freedom to Vote Act, a compromise bill introduced by Senator Democrats including Joe Manchin (D-W.Va.) that would expand access to the ballot, ban partisan gerrymandering, and crack down on dark money. But he warned that Democrats would lose their Congressional majorities if they failed to reform the filibuster to overcome GOP opposition and pass it.

“Competitive elections allow more voters, hence more likely Democratic voters, to participate in the decisions at the end of the day,” O’Rourke said. “And if we, as Democrats or pro-democracy Americans, are not willing to use every tool available to us, while Republicans are using every tool available to them to constrict and reduce and perhaps demolish the right to vote altogether, then we become complicit in the outcome. And I’m not in for that one.”

He noted that communities of color in states like Texas and Georgia were the strongest supporters of Joe Biden and the most likely to be targeted by voter suppression efforts. “If, when the fight was engaged, Democrats walked off or stood on procedure instead of winning the damn thing…we’ll lose. And frankly, it would be hard to argue that we wouldn’t deserve to lose if we fail to fight now and fail to win this fight now.”https://platform.twitter.com/embed/Tweet.html?dnt=true&embedId=twitter-widget-1&features=eyJ0ZndfZXhwZXJpbWVudHNfY29va2llX2V4cGlyYXRpb24iOnsiYnVja2V0IjoxMjA5NjAwLCJ2ZXJzaW9uIjpudWxsfSwidGZ3X2hvcml6b25fdHdlZXRfZW1iZWRfOTU1NSI6eyJidWNrZXQiOiJodGUiLCJ2ZXJzaW9uIjpudWxsfSwidGZ3X3NwYWNlX2NhcmQiOnsiYnVja2V0Ijoib2ZmIiwidmVyc2lvbiI6bnVsbH19&frame=false&hideCard=false&hideThread=false&id=1441123316241211397&lang=en&origin=https%3A%2F%2Fwww.motherjones.com%2Fpolitics%2F2021%2F09%2Fbeto-orourke-voting-rights-bill-democrat-majorities%2F&sessionId=117ba0fdfc6a7f43c475b4ceef902a9fdfd3e6e4&siteScreenName=Motherjones&theme=light&widgetsVersion=1890d59c%3A1627936082797&width=550px

He predicted that if Republicans take back control of one or both houses of Congress, they would bring impeachment proceedings against Biden and try to overturn the 2024 election results.

“If we stand on the principle of the filibuster, and deny ourselves the ability to effectively fight back and save this democracy, I really do fear we lose it forever,” he said.

Mother Jones was founded as a nonprofit in 1976 because we knew corporations and billionaire owners wouldn’t fund the type of hard-hitting journalism we set out to do.

Today, reader support makes up about two-thirds of our budget, allows us to dig deep on stories that matter, and lets us keep our reporting free for everyone. If you value what you get from Mother Jones, please join us with a tax-deductible donation today so we can keep on doing the type of journalism 2021 demands.