The images went viral over the weekend. Department of Homeland Security agents astride on horses and using whips to herd migrants from Haiti, as if they were unruly cattle who’d escaped from a farm

Biden Is Continuing a Long Tradition of Mistreating Haitian Migrants

It started long before Trump. 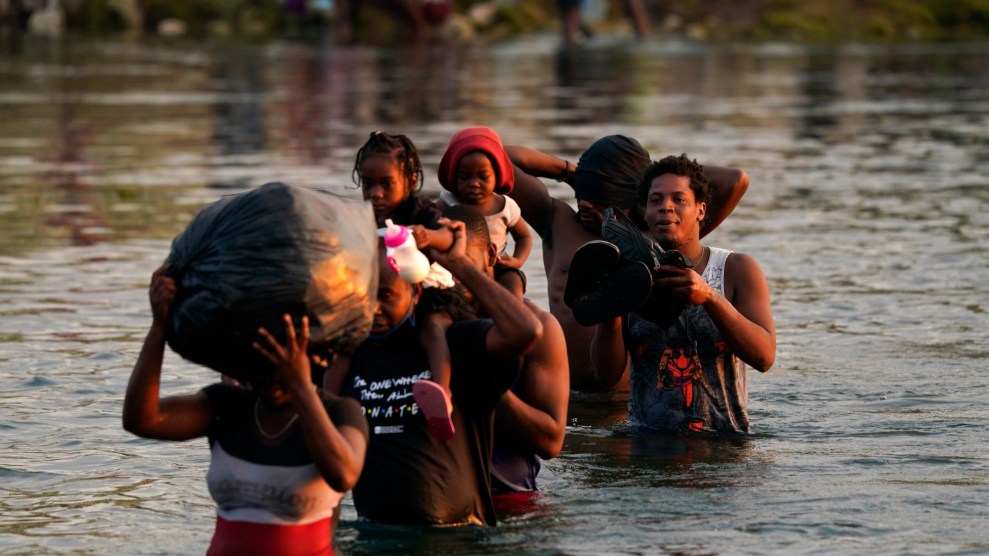 Fernando Llano/APFight disinformation. Get a daily recap of the facts that matter. Sign up for the free Mother Jones newsletter.

The images went viral over the weekend. Department of Homeland Security agents astride on horses and using whips to herd migrants from Haiti, as if they were unruly cattle who’d escaped from a farm. Jen Psaki, the White House Press Secretary, condemned the border patrol actions, which were a bit too reminiscent of white men on slave-catching patrols. “That’s not who the Biden-Harris administration is,” she told CBS.

But rounding up Haitians and denying them their legal right to seek refuge on US soil is exactly who America is—and has been for decades. No sooner had nearly 14,000 Haitian migrants crossed the US-Mexico border and amassed under a bridge in Del Rio, Texas, did the Biden administration begin to assemble and load them on expulsion flights for deportation to Haiti—even though many had not lived in Haiti for years.

“The US government showed a total disregard for the right to seek asylum when it sent agents on horseback with reins flailing to control and deter this largely Black migrant population,” Alison Parker, the US managing director of Human Rights Watch said in a statement. “This violent treatment of Haitians at the border is just the latest example of racially discriminatory, abusive, and illegal US border policies that are returning people to harm and humanitarian disaster.”

Let me admit at the onset: I’m biased. My family is Haitian and my parents came to the US in the 1980s seeking economic security. It’s painful to see images of people who look like me and my family, who could be me and my family were it not for the quirks of the US immigration system, being treated in such a dehumanizing manner. But this raises a larger question. Which migrants are treated with compassion, and which ones aren’t? Are there groups who somehow rise to a level of being seen with empathy, or as potential assets to our society? Or is the real point, as Donald Trump suggested, that the only immigrants we really want are from countries like Norway? “The US government showed a total disregard for the right to seek asylum when it sent agents on horseback with reins flailing to control and deter this largely Black migrant population,”

The speed of the administration’s mass deportation of thousands of Haitian migrants has been shocking—especially considering the fact that Democrats spent four years under Donald Trump framing cruel and inhumane treatment of immigrants as a Republican specialty and one of the many reasons to vote Trump out of office. But even a non-exhaustive look at recent history shows that regardless of who is in the White House, it seems as if when it comes to Haitians seeking refuge in the US, this is the standard operating procedure. The United States, like most western countries, has a difficult and complicated system for asylum seekers. But for Haitians it’s been particularly unforgiving.

As has always been the case for migrants all over the world, the decision to make the costly and dangerous trip to the US is never based on a single issue. Haiti has been ravaged by natural disasters, political violence, and economic turmoil for years.

The country these migrants are being forcibly deported to has been ravaged by a series of crises. Even more than a decade later, Haiti is still recovering from a 7.0 magnitude earthquake that struck in 2010. The quake killed approximately 300,000 people of a population of 10 million and made millions more homeless. In October 2016,  Hurricane Matthew ravaged the southern coast as a category 4 storm that killed 900 people and destroyed most of the country’s southern region. Then, in July 2021, Haiti’s president Jovenel Moïse was assassinated. A few weeks later, another earthquake rocked the country: more than 2,000 people perished, and 30,000 more were displaced. Recovery efforts were hampered by a tropical storm that caused flooding and landslides. The country is currently beset by food shortages and violent actors seeking to exploit the political instability.

There always seems to have been a particularly high bar for Haitians when it comes to entering the United States. In 1971, for instance, during the regime of François “Papa Doc” Duvalier, Haitians began leaving the island en masse by boat as life under the repressive dictatorship became unbearable. But this was during the Cold War when the United States was always eager to overlook a country’s human rights policies in favor of its commitment to anti-communism. Duvalier was no exception. Despite a history of killing and exiling his political opponents, he was stridently on the side of the US in the Cold War, and the US government generally ignored his many transgressions and considered him an ally. When the migrants began arriving by boat in Florida, local officials began to protest and the federal government classified them not as victims of political repression, but as “economic migrants,” which means they were ineligible to seek asylum—a protection reserved for victims of human rights violations.

In response to the devastating 2010 earthquake, the Obama administration extended Temporary Protected Status—a special immigration program that allows people already residing in the US to be shielded from deportation—to migrants from Haiti. The administration also placed a moratorium on deportations. Approximately 50,000 Haitians took advantage of the status, but it didn’t do much for Haitians abroad, as the reprieve applied only to people already residing in the US before a certain date. Six years later, the Obama administration lifted the deportation moratorium on Haitians, and a recent influx of migrants at the border in California were turned back. The Trump administration adopted this policy of expelling migrants before even letting them apply for asylum and extended it to the entire border.Advertise with Mother Jones

Despite positioning himself as Trump’s opposite during the 2020 election, Biden has continued many of the former president’s border policies, like Title 42, the program that is allowing Haitians to be expelled at the border because of concerns about public health. In February of this year, the Biden administration expanded the number of deportation flights to Haiti, despite the volatile conditions there. And now, many of the Haitians in Del Rio will face the same fate.

According to CNN, after being detained in holding centers, deportees were not told they were going to the very place they had successfully escaped from sometimes years before. Some of the deportees have no family living in Haiti and don’t even speak Haitian Creole. After landing in Port-au-Prince, some tried to re-board the plane but Haitian police blocked them. “If Biden continues with these deportations, he’s no better than Trump,” one Haitian man told the Washington Post.

It’s no secret that no matter who the president is, the immigration system remains discriminatory and confusing. But for the last few decades, Democrats have portrayed themselves as the party that is pro-immigrants, championing programs like DACA that allows people who were brought to the US as minors to live and work here. During the 2020 election, Biden criticized Trump’s immigration policies, especially regarding the child migrants at the border. And with Afghanistan, while the evacuation and visa system was chaotic, Democrats welcomed our allies with open arms, while many Republicans expressed hostility to the notion they would resettle here. “We should rescue Afghans who’ve assisted the US military, but they should go to a neutral & safe third country,” Sen. Ted Cruz (R-Texas) tweeted last month.

But when it comes to Haitian asylum seekers, the Biden administration isn’t bothering with the niceties, beyond acting horrified by the optics of herding Black people on horseback. “Deportation flights to Haiti are the type of morally indefensible news we expected from the Trump Administration, not the Biden Administration,” the Black immigrant rights group UndocuBlack Network tweeted.

GET OUR AWARD-WINNING MAGAZINE

Save big on a full year of investigations, ideas, and insights.SubscribeAdvertise with Mother Joneshttps://platform.twitter.com/embed/Tweet.html?dnt=true&embedId=twitter-widget-1&features=eyJ0ZndfZXhwZXJpbWVudHNfY29va2llX2V4cGlyYXRpb24iOnsiYnVja2V0IjoxMjA5NjAwLCJ2ZXJzaW9uIjpudWxsfSwidGZ3X2hvcml6b25fdHdlZXRfZW1iZWRfOTU1NSI6eyJidWNrZXQiOiJodGUiLCJ2ZXJzaW9uIjpudWxsfSwidGZ3X3NwYWNlX2NhcmQiOnsiYnVja2V0Ijoib2ZmIiwidmVyc2lvbiI6bnVsbH19&frame=false&hideCard=false&hideThread=false&id=1440018656457527298&lang=en&origin=https%3A%2F%2Fwww.motherjones.com%2Fpolitics%2F2021%2F09%2Fbiden-is-continuing-a-long-tradition-of-mistreating-haitian-migrants%2F&sessionId=4a401f801670ff630e88aa981d6439e25dea3536&siteScreenName=Motherjones&theme=light&widgetsVersion=1890d59c%3A1627936082797&width=550px

The dehumanizing and illegal treatment of Haitians at the border sends a message that contradicts all of the ideals that the Biden administration supposedly espouses. It’s difficult not to see this as a variation on the old theme of Black lives don’t matter. And when it comes to finding asylum, Haitians should look elsewhere.

Mother Jones was founded as a nonprofit in 1976 because we knew corporations and billionaire owners wouldn’t fund the type of hard-hitting journalism we set out to do.

Today, reader support makes up about two-thirds of our budget, allows us to dig deep on stories that matter, and lets us keep our reporting free for everyone. If you value what you get from Mother Jones, please join us with a tax-deductible donation today so we can keep on doing the type of journalism 2021 demands.