A great Story for This Fourth of July—DESMOND T. DOSS—a Hero of WWII

A great Story for This Fourth of July—DESMOND T. DOSS—a Hero of WWII

Tonight, after watching a History Channel special on “the American Revolution”, I switched over  (this holiday weekend) to TBN, a Christian broadcast network.  There, I watched one of the more important documentaries of the past few decades:  THE CONSCIENTIOUS OBJECTOR.

The movie is the story of Desmond T. Doss, a man of faith who refused to kill or even touch a weapon but saved hundreds across the Pacific Isles of WWII as a volunteer medic.

After WWII, Harry Truman stated he was very very honored to be able to make Desmond the first Conscientious Objector to receive the Medal of Honor.  Desmond is now honored in book form, movie form, and in comic book form.

Some have called him “the greatest hero ever”.

Desmond’s faith and fearlessness is appreciated all over the globe, even after he died in 2006.

In his obituary tribute to Desmond T. Doss on his death in 2006, Richard Goldstein wrote the following for the NEW YORK TIMES, “Desmond T. Doss, who as an unarmed Army medic saved the lives of dozens of fellow soldiers under fire on Okinawa in World War II and became the first conscientious objector to receive the Medal of Honor, died Thursday, 23 March 2006, at his home in Piedmont, Ala. He was 87. His death was announced by his wife, Frances, who said he had recently been hospitalized with breathing difficulties.

“Mr. Doss, a member of the Seventh-day Adventist Church, was guided all through his years by a framed poster of the Ten Commandments and the Lord’s Prayer that his father bought at an auction when he was growing up in Lynchburg, Va. That poster depicted Cain holding a club with the slain Abel beneath him.” 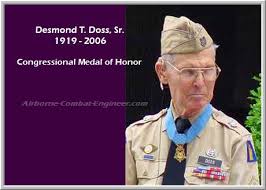 Doss himsel had stated in an interview, “And when I looked at that picture, I came to the Sixth Commandment, ‘Thou shalt not kill,’ ” Mr. Doss told Larry Smith in “Beyond Glory,” an oral history of Medal of Honor winners. “I wondered, how in the world could a brother do such a thing? It put a horror in my heart of just killing, and as a result I took it personally: ‘Desmond, if you love me, you won’t kill.’ ”

Goldstein continued,“When Mr. Doss was drafted in April 1942 after working in a shipyard, he was given conscientious objector status, having declined to bear arms because of his religious principles. He became a medic, the only way he could adhere to the Sixth Commandment as well as the Fourth Commandment, to honor the Sabbath. Seventh-day Adventists consider Saturday the Sabbath, but Mr. Doss felt he could serve as a medic seven days a week since, as he put it, ‘Christ healed on the Sabbath.’”

Earlier, “[w]hile training at stateside posts, Private Doss faced harassment from fellow soldiers for his devotion to prayer and his refusal to handle weapons or work on the Sabbath. At one point, he recalled, an officer sought to have him discharged on the ground of mental illness.”

The documentary film (noted above) shown on TBN this night did a wonderful job of sharing how persecuted Doss was during his military training due to his faith and practice of “not touching weapons”.  Doss “went overseas with the 307th Infantry, 77th Infantry Division, in the summer of 1944 and served as a combat medic on Guam and at Leyte in the Philippines, receiving the Bronze Star, before taking part in the battle for Okinawa in the spring of 1945. Private Doss was accompanying troops in the battle for a 400-foot-high ridge on Okinawa, the Maeda Escarpment, on Saturday, May 5 — his Sabbath — when the Japanese counterattacked. Many of the Americans were driven off the ridge, but wounded soldiers were stranded atop it.”

In the documenary we discover from various witnessess that “Private Doss remained with the wounded, and, according to his Medal of Honor citation, he refused to seek cover, carrying them, one by one, in the face of enemy fire. He lowered each man on a rope-supported litter he had devised, using double bowline knots he had learned as a youngster and tying the makeshift litter to a tree stump serving as an anchor. Every wounded man was lowered to a safe spot 35 feet below the ridgetop, and then Private Doss came down the ridge unscathed.”

Finally, “[a]fter engaging in additional rescue efforts under fire over the next two weeks, Private Doss was wounded by a grenade that riddled him with shrapnel. He cared for his injuries alone for five hours, rather than have another medic emerge from cover to help him. While he was finally being carried off on a litter, he spotted a soldier who seemed worse off. He leaped off the litter, directing his aid men to help the other soldier.Soon after that, Japanese fire hit him, and he suffered a compound arm fracture. He bound a rifle stock to his shattered arm as a splint, evidently the closest he ever came to handling a weapon, and crawled 300 yards to an aid station.”

“President Harry S. Truman presented him with the Medal of Honor on Oct. 12, 1945, for his actions on Okinawa. The citation credited him with saving 75 soldiers on that ridge, but he later said that the number was probably closer to 50.”  Subsequently, our hero “Mr. Doss spent more than five years in hospitals being treated for his wounds and lost a lung to tuberculosis. Because of his infirmities, he was unable to seek steady work. He devoted himself to his religion and worked with young people in church-sponsored programs, living for many years in Rising Fawn, Ga., before moving to Alabama.”

According to Goldstein, “Only one [ or two] other conscientious objector has received the Medal of Honor: Cpl. Thomas W. Bennett, an Army medic in the Vietnam War who was killed in February 1969 tending to wounded soldiers in Pleiku Province.”

“From a human standpoint, I shouldn’t be here to tell the story,” Mr. Doss  once said, “All the glory should go to God. No telling how many times the Lord has spared my life.”

I recommend that Americans take time to learn about  Desmond Doss and many other great conscientious objectors this Fourth of July—and in future years.  Learn that not all heroes act violently.

Here are some links to get you started thinking about this topic:

Who do you know that should be on a famous conscientious objector list?  Tell us why?

Oh, yeah, here are some YouTube bits to watch, too.

38 Responses to A great Story for This Fourth of July—DESMOND T. DOSS—a Hero of WWII