THE CONTRAST ON COVER OF INTERNATIONAL HERALD TRIBUNE: Protests and Counter Protests in Dresden and Protests in Afghanistan

THE CONTRAST ON COVER OF INTERNATIONAL HERALD TRIBUNE: Protests and Counter Protests in Dresden and Protests in Afghanistan

By Kevin Stoda, in Germany

IHT noted that far right and neo-Nazi leaders in Germany have equated the firebombing of Dresden to a Holocaust. Today (February 14, 2009) saw the largest numbers of neo-Nazis in years on the streets of this Saxon capital today.

However, IHT did not mention that a lot of other Germans and non-Germans, such as Polish slave laborers in the Germany on February 12 through14, 1945 might have called it a Holocaust later themselves—if they survived to tell about it.

From February 12 through February 14, 1945 Dresden had been fired bombed to the ground by the allied forces near the end of WWII. Early reports of those who died in the fire bombings ran to 200,000.

In recent years the numbers were identified as much lower—something like 25,000 to 30,000 in all. However, that city’s particular almost total destruction came as close as any set of bombings in Europe in WWII to imitating the destruction of bombings that Tokyo, Osaka, Hiroshima, and Nagasaki revealed at that same wars end.

More buildings in Japan were made of wood and were thus more readily incinerated in firebombing and atomic attacks than was the case in Germany in the 1940s.

Needless to say, the great majority of those killed in those bombings in Dresden were civilians, including some of the last Jews living in Germany at that time as well as allied soldiers, such as Kurt Vonnegut, who wrote of this event in his science-fictional work, SLAUGHTER HOUSE FIVE.

Meanwhile, today in Afghanistan, Americas’ new envoy to the region, Richard Holbrooke visited that capital city of Kabul just a few days after Taliban attacks reached the capital for the first time in years.

Holbrooke’s various meetings and negotiations also “came on the day the Australian military announced that five children had been killed in predawn fighting Thursday between Australian special operations troops and Taliban guerrillas in south-central Afghanistan, the latest incident of rising civilian casualties that have hurt support for American and NATO troops here.”

This comes only weeks after a series of bombings by USA forces purportedly attacking Taliban forces killed other civilians. (Last autumn, 60 members of an Afghani wedding party were bombed by U.S. forces by accident—i.e. collateral damage.)

According to IHT reports, Afghanis will continue to push their case for an end to reckless bombing raids leading to civilian deaths in the next days as they meet with Holbrooke. “The deaths come amid growing complaints from Afghan officials, including President Hamid Karzai, about civilian casualties. The officials have said that plans by the U.S.-led military alliance in Afghanistan to add as many as 30,000 more American troops could lead to more fatalities.”

MEANWHILE BACK IN DRESDEN 2009

There were several conflicting reports in Germany today as to what has taken place in Dresden. Radio station news reports initially indicated that although the numbers of neo-Nazis and rightwing marches were in the thousands, they were outnumbered by 10,000 leftist- and conservative peace witnesses who held a counter protest.

Meanwhile, the various German radio and news stations I have heard gave reports which claimed that astoundingly there was no fighting or confrontations.

However, later the IHT reported, “Police said they broke up a third demonstration, involving about 2,500 left-wing opponents of the far-right march, after officers were targeted with stones and bottles.”

According to Dresden Mayor, Helma Orosz, “The neo-Nazis emphasize revenge; we [the counter protestors] set against that our will for peace.”

According to one of the few English-language dailies, THE LOCAL, in Germany, “Thousands of people took to the streets of Dresden on Saturday to protest against a neo-Nazi march to commemorate the victims of the 1945 Allied bombing raids on the eastern German city.”

In addition, the same German English daily reported, “Several prominent members of Germany’s Jewish community and politicians took part in the demonstrations called by rights groups which began with a public Sabbath in the Dresden synagogue.

Even after the U..S. supported the Afghani leader, Hamid Karzai for years, he too has belatedly joined the protests against the U.S. and its allies recklessness over the past year or two.

Alas, both Karzai’s poor record of achievement and record of not-fighting corruption in his own regime over the past 8 years have left Karzai little political support nor power as he faces an uphill reelection campaign this coming year in Afghanistan.

According to a fairly recent UN report, the number of Afghani civilian deaths, due to bombings and fighting from all sides in Afghanistan (including NATO, UN troops, and Taliban forces): “More than 2,100 civilians in Afghanistan were killed last year as a result of armed conflict, a 40 per cent rise from the previous year, the UN’s humanitarian chief said Tuesday.”

DO WE SEE THE LIGHT?

I have a question, when will the USA and its war allies learn that bombing the hell out of civilians is always bad NOW and IN the future.

In the old Cold War days, Curtis LeMay led and dominated U.S. aerial bombing policies even as they tried to run roughshod over presidents like Eisenhower and Kennedy. These were military men who had little use for elected officials.

According to several sources, “LeMay apparently had grown immune to the horror of killing. He had directed the gasoline-jelled fire bombing of Japan — estimated to have killed ‘more persons in a six-hour period than at any time in the history of man.’ He said of war: “You’ve got to kill people, and when you’ve killed enough they stop fighting.’ He once said, ‘We killed off — what — twenty percent of the population of North Korea.’ More than two million civilians died in LeMay’s campaign from napalm bombing and destruction of massive dams to flood waterways.” 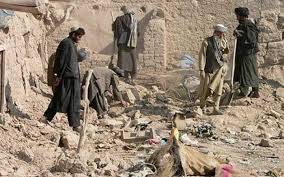 In other words, from the 1940s to the 1960s all factions in the USA military were led by groups of men who were often not only great Cold Warriors but leaders who preached a simple reality they called “collateral damage” when trying to scare the hell out of American enemies. (This required a psychological blocking of memory and reality by the average pilot and navigator as well as soldiers who witnessed bombing ‘collateral damage’ as a people burned to smitherings.)

This sort of recklessness in American and allied military bombing history and practice has never made the U.S. or its Allies appear any better in the eyes of civilians, i.e. those who are victims of bombings (and describe as the “collateral damage’).

Civilians who receive the brunt of run-away bombing methods and fire bomb parties do not forget—neither do their children, grandchildren or their grandchildren.

Just look at Dresden today, a capital in Eastern Germany for neo-Nazis and rightwing renegades.

One only has to look at Israel and Palestine or to Iraq to see how burning buildings and charred bodies end up fueling the worst excesses, like suicide bombers and blind rocket attacks on civilians again—repeating the visions and imaginable limits of “acceptable collateral damage” again to the Palestinian warmongers or Al Qaeda perpetrators

Perhaps, instead of giving flowers and hear shaped boxes of chocolate on February 14 each year, Americans and their allies should mourn and march for peace as is the form of counter-protest in Dresden each year. 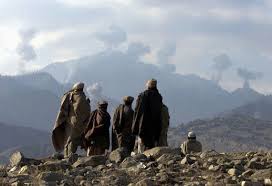 I am a peace educator who has taken time to teach and work in countries such as the USA, Germany, Japan, Nicaragua, Mexico, the UAE, Kuwait, Oman over the past 4 decades.
View all posts by eslkevin →
This entry was posted in Uncategorized and tagged dresden protestors demonstration USA military allies peace afghanistan memory valentines. Bookmark the permalink.

1 Response to THE CONTRAST ON COVER OF INTERNATIONAL HERALD TRIBUNE: Protests and Counter Protests in Dresden and Protests in Afghanistan